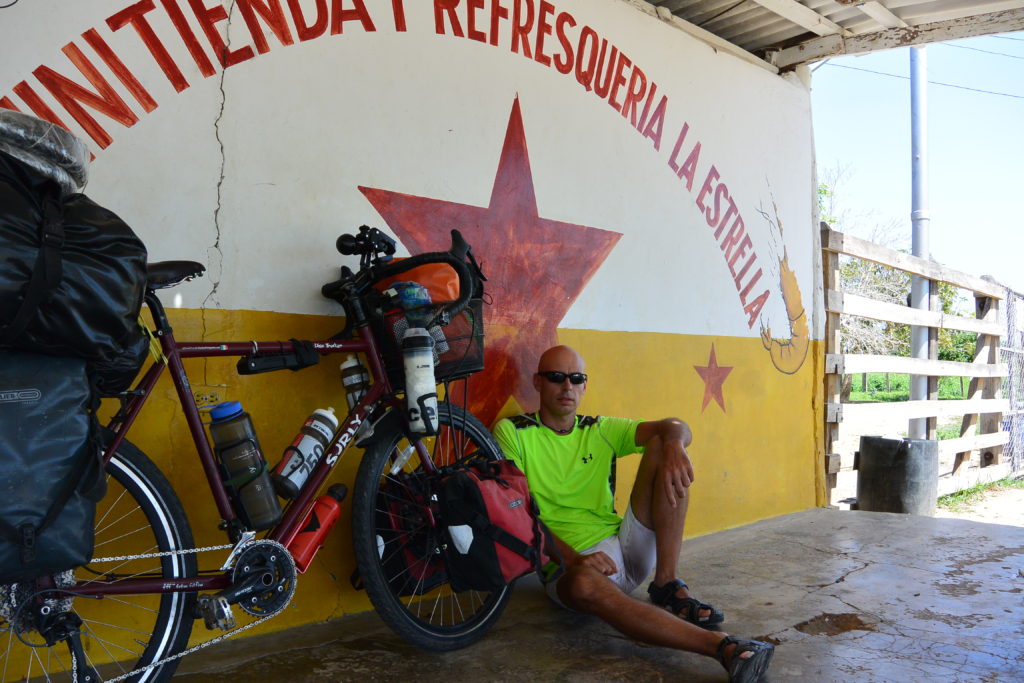 If you’re not facing fear every day, you’re getting weaker, not stronger. – Tony Robbins

A few days ago I was on a truck surrounded by Indians of La Guajira, on a strip of desert in the northern most tip of South America – a land divided between Colombia and Venezuela. I was on the truck, instead of on my bike. I was stunned, with one hand and neck that were burning, and stinging bumps in my head. With a smile on my face, I drank a sort of native rum prepared with raw cane sugar as I answered the most absurd questions that these people made me. I was still alive, still had all my belongings. I had just been attacked by three men who wanted to steal everything: bike and bags. Once I understood that what I had pointed at my temple was not a gun but a piece of wood covered by a shirt I got tired of getting punched in the head and I quickly took the bears spray from the bike basket and covered the face of the unfortunate blokes with one of the evillest substances there is.

The day before I had left Riohacha to go into the desert to Uribia, but my body shut down, I could not drink water or to feed myself. Getting to Uribia was a real mental effort because the body did not answer for a long time. The last four hours I pedalled with leg cramps, hunger and thirst. I did not want to camp in the wilderness along the way, something told me not to.  Apparently desert, the place seemed incredibly populated and intimidating.

Once back to Uribia, in a truck to escape the robbers, I decided to leave the desert and leave La Guajira. The problem is that after you’ve been assaulted by a motorcycle in the desert and left two people with their faces covered in bear spray there is the possibility that someone is searching for you, that their friends can take revenge. With this spirit I left Uribia; waiting for me there was an 80Km straight road without a curve or a bend, during these 80Km probably a hundred motorbikes approached me at a low speed.

You can imagine my state of mind. You can imagine my state of mind when yet another motorcycle was slowly approaching with three guys on board and I feel a punch in the head and my glasses flying away. It took me a few seconds to realize that they were not seeking revenge but only to steal your glasses (if then there was someone of Oakley listening and wants to send me two replacement lenses).

You can imagine my state of mind when after 5Km I was approach by two motorcycles, one rides next to me with an armed gentleman, looks like a private guard, and begins to ask me: you come from Cabo? Nono no sir I come from Riohacha, who you’re looking for is not me! Then he asks me if I have a camera, the gag lasts a few minutes with me playing dumb and then explaining that the thing on my handlebar is simply a light.

The last two or three days have made me realize that in addition to my body also my mental strength has increased on this trip. Sure the body has become much more resilient but the same can be said for my mental strength, how I adapt more easily to the various situations in which I find myself, as I can endure more pain.

I could have hitched a ride to leave Uribia, I could have returned quickly to Riohacha with a strong tailwind and a welcoming home waiting for me. But I decided that I had to face my fears openly and not let some debauched or delinquent alter my trip and my plans.

I met hundreds if not thousands of people during this trip that helped and supported me, from those who gave me water, to those who offered me food, those who welcomed me in their home, who gave me information and who gave me money, those who let me to camp on their property. Despite what you read in the newspapers or see on TV, the majority of people in this world are kind-hearted and if they can help they will. We must open ourselves to the world and after a traumatic experience such as a robbery in the desert it is not easy to get back on a bike as if nothing had happened, but we must not run away and hide. You have to face your fears and take the first step, just like the old Halvin said. Certain situations should be weighed with careful risk management but then you go on towards your goals and dreams, accepting the difficulties or challenges that our destiny hold for us. They are most likely our best chance for growth.

The downside of this whole affair is that I know for sure that I’m not ready to give up my things, my worldly possessions. An attachment to material things which cannot be helpful, and indeed in such a situation could have cost me dear. Definitely something to think about and maybe this is the lesson I must learn. My growth opportunity.

Meanwhile, you are all spared of yet another GoFundMe campaign (but if you kindly want to make donation for my trip I will be very happy to accept it).

My first year on the road – thoughts