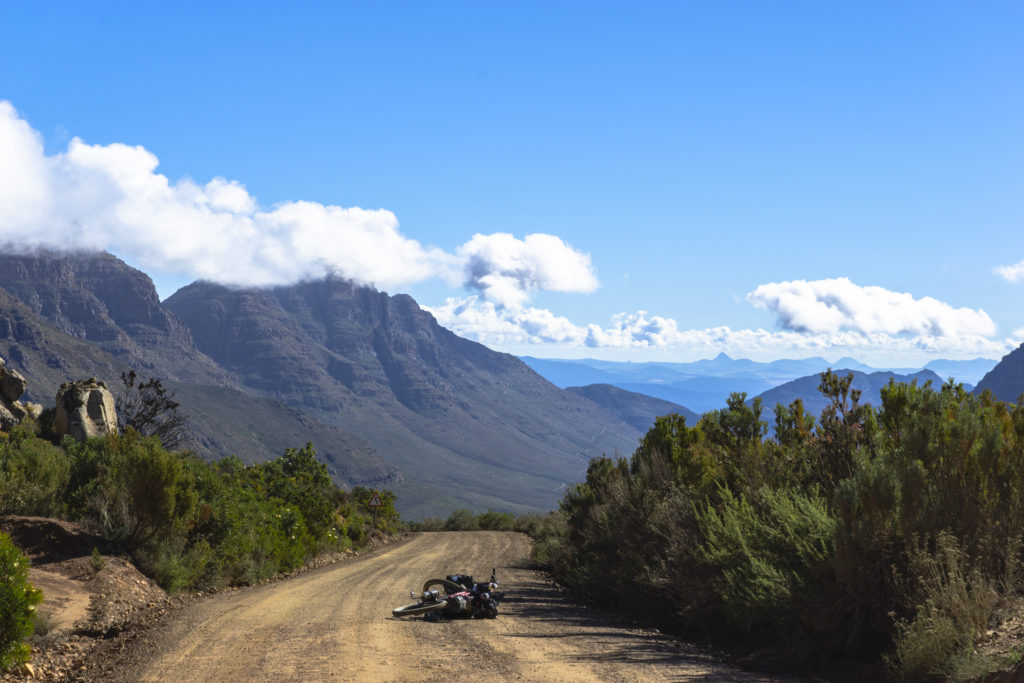 Man’s real home is not a house, but the Road, and that life itself is a journey to be walked on foot. – Bruce Chatwin

There is always frustration when you relate to someone who does not speak your language and does not seem to make the slightest effort to try and understand you. In Latin America the frustration sometimes made me fume because I knew I did not speak Arabic (by now my Spanish I spoke it was relatively fluent) but sometimes it happened that people looked at me as if they were observing an alien being with five heads. I had a great desire to shake them energetically…damn it!

After a day of dirt climbs, fighting against a strong headwind that blew NNE and even having to ration water, I failed to arrive at my fixed goal. At about 4:30 pm with the sun already setting but with an hour before sunset, as soon as I saw a space without vegetation on the side of the road I stopped to inspect it. By now exhausted I decided that I would spend the night there at the mercy of any thief or insane four-wheeler (not that I had seen more 4×4 of my left hand’s fingers all day), leopard or baboon. When the measure is full, and the energy finished you cannot continue. I waited an hour to see if the wind and my thirst would diminish to pitch the tent.

The next morning, nice and early and in a better mood, I left again and arrived at previous day’s destination: a large property with a farm, and a few chalets for tourists.

Got here and everything is closed, the owners are not present. I’m looking for staff, but they speak only Afrikaans. Now it’s not that I pretend that everyone speaks English but a minimum effort to try to communicate a little yes. Then one guy seems to say: wait I’m gonna get someone, he comes back after fifteen minutes and do not even look at me and if I ask him something he doesn’t answer as if I wasn’t there at all…. well it is better to be philosophical about it. However, after exhausting attempts at communication they passed me the phone with the owner to whom I clarified that given my backache and the predictions of bad weather for the next day I was looking for a corner with a roof where I could place my tent. Apparently in South Africa they think very fancy and nobody can understand that roof under which they park a tractor for me is pure gold when they forecast wind gusts of 60kmh and 28mm of water, but the lady told me that there was no roof available, at the most I could spend the night in the bathroom and to follow her employee with the 4×4. A little bit puzzled about what she meant, I followed a girl on a Land Rover who lead me to the designated campsite on a sandy double track road about 3km away. I could stay here without paying anything and I could sleep in the bathroom to protect myself from the elements.
The campground is very nice even if out of season I understand why they wanted to place me there when I would have preferred the shed where the tractors are parked. It is very beautiful because wild: a piece of dry steppe desert without designated pitches and electricity. But there is a small straw building with two rooms: bathroom and shower. In the shower room there is space to fit in some way or another my tent. That I pitched after taking a hot shower (it seems strange but there is a boiler with a large gas cylinder, the strangest thing is that I managed to light the pilot flame). The only drawback is that the bore hole water is slightly salty and after gaining an idea of the system (water pumped from the well to a large plastic tank hoisted on a wooden structure about ten meters in height) I decided that the best strategy was to boil water and avoid using the filter to avoid clogging with salt. I didn’t consider the Steripen after all the weather was coldish, I should still heat water to eat.

The following morning began to pour rain and soon I realized that the room where I had placed the tent would become a swimming pool as water filtered from under the door and the concrete floor is certainly not draining. As impermeable as tents are, they have a very strong enemy: the puddle. Even a few millilitres of puddle can flood a tent; mine begins to show signs of wearing, but on the other hand it has been my loyal house ever since Panama and these light tents surely are not made to last forever. I hope to be able to use it a little longer, at least for the whole African continent, then I will have to think about a replacement.

In a hurry but without fury, I filled two plastic bags with some sand fitting them on the door outer side, there was no space on the inside anyhow.
Saved the salvable, the result was good enough even if the floor of the tent filtered a bit of water/moisture at the bottom closer to the door.

Later it was a succession of reading, boiling water to eat and sleep. Fortunately/unfortunately there was no cell coverage. Tomorrow after the third night spent here I should be able to leave hoping the rain stops.

I will leave about two books wiser.

I was able to read Bruce Chatwin’s In Patagonia yesterday.
Honestly, I thought the book was more dated but in fact it was supposedly written in the late 70s, so I guess his trip to Patagonia is in that decade. When I’ll have a connection to the parallel world I will check (checked: trip in 1974 and publication in 1977).

Bruce’s trip is a journey of historical research, of old stories of familiar emigrants and travellers, rich English landowners and foreigners who have made Patagonia their home. Whose stories are intertwined with anarchist revolutionaries, marxists, native indios, generals, gringo outlaws, catholic missionaries, gauchos, peons and many others. A scholarly journey that made me very impressed by the amount of historical and literary notions of Bruce but also by the meticulousness in gathering information and intelligence in connecting different sources. I think there is a lot of imagination in his telling all these anecdotes, but I presume only to make the stories pleasant not to alter the facts but anyway there is a lot of made up material and one’s could end up forming a rather distorted idea. The result is a Patagonia stripped of indigenous traditions and cultures as only foreign immigrants had brought civilization.

There are some curiosities that have been clarified by reading Bruce’s book.

Firstly, the story told me by a family of French cyclists: Julian and Marie. A couple traveling with their beautiful three-year-old girl Nina who were housed in my Magallianic family’s home. At dinner they told how a Frenchman had been king of Patagonia.
Indeed, it seems that a Frenchman in search of a kingdom has taken almost all the money from the family common account heading it towards impoverishment and left for Patagonia where he convinced the Araucan Indians to elect him king of Auracania and Patagonia but in reality no government nor the Chilean one or the Argentine one took the matter seriously. Although some official consulate was opened in some exotic states like Mauritius and certain other islands in the Caribbean and perhaps in Nicaragua. When the Vatican was approached, Bruce reports that a Chilean prelate said, “This kingdom exists only in the mind of drunken idiots.”

The second story that Bruce narrated very well and that was mentioned to me by Pache, Chilean of Villa O’Higgins, who with his wife Paola has hosted me for ten days in his house, is that of the Revolution of Patagonia (also known such as Patagonia Tragic or Patagonia Rebel) or the anarchist rebellion of 1920 against the owners of estancias. Bruce says he is fascinated because “for this revolution in miniature seemed to explain the mechanics of all revolution”.
The end was quite tragic. Initially, the Argentine colonel in command of the tenth cavalry sent by Buenos Aires to restore order to Patagonia had aroused the indignation of foreign landowners with his pacification program that provided for amnesty and concessions to the strikers. But when the strikers’ leader dreamed of a socialist revolution that spread from Patagonia all over the country, the colonel understood that he had made himself ridiculous and declared: “if they start again, I’ll kill everyone there”.
So, it was but what is not clear is that the leaders of the revolution managed to escape leaving all the peons to an absurd destiny. We do not understand well either because the Argentine army was so cruel to have a bloodbath. Indeed, under the orders of landowners who said wanting 30 peons (so Bruce defines the workers of estancias / revolutionaries) dead for every stolen horse. The revolutionaries were even forced to dig their own pits.

Another story of the anarchist Simon Radowitzky who became one of the most important prisoners locked up in Ushuaia’s prison, Bruce begins by telling it this way:  “The story of the Anarchists is the tail end of the same old quarrel: of Abel, the wanderer, with Cain, the boarder of property. Secretly, I suspect Abel of taunting Cain with ‘Death to the Bourgeoisie!”.

Bruce is very direct and sharp in judging the people he meets on the journey or in his historical reconstructions but he’s always witty and pleasant to read, simple and flowing. For example, describing this Archie Tuffnel: “He was not intelligent but wise”.

My journey is more ignorant. Who knows what words Bruce would use: he was neither intelligent nor wise, a wandering peon on a bike because he had nothing better to do.

I like Bruce, if only for the interesting stories of the North American bandits and outlaws of the Wild Bunch, escaping from the long arm of the law, holing up in Patagonia: Butch Cassidy, Sundance Kid, their lover Etta Place and the others.

As for Patagonia, I would say that “In Patagonia” there is so much life and so many stories and traditions and culture, but there is no trace of this in the book.

If you enjoyed reading this blog post, consider leaving a comment below and/or buy me a drink or a meal through a small donation as encouragement to keep this trip and blog going.
Check out the “SUPPORT THIS” page or simply go ahead and do a secure and safe donation with credit or debit card here: paypal.me/davidetravelli 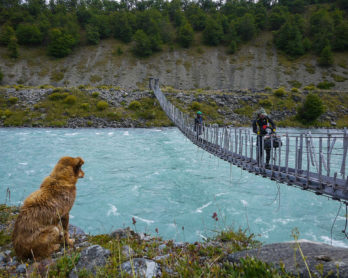